Paper of the week: Visualizing associations between paired data sets

This week's paper of the week is by González, et al., entitled "Visualising associations between paired `omics' data sets," and published in BioData Mining (vol 5:19). The pdf of this report can be found here.

The authors demonstrate that graphical outputs such as Correlation Circle plots, Relevance Networks and Clustered Image Maps are useful in the visualization and interpretation of output from integrative analysis tools. The goal is to facilitate an understanding of systems as a whole when complex data often force donning of blinders to not observe the whole forest.

The graphical tools described in the report are implemented in the freely available R package mixOmics and in its associated web application.

As an example of what the authors have built, consider their presentation of Nutrimouse data showing correlations (or not) between between large data sets, in case gene expression and metabolite levels in liver, as taken from their figure 5.The Nutrimouse data are from a nutrigenomic study in which 40 mice from two genotypes (wild-type and Ppara -/-) were fed five diets with different fatty acid compositions. Details are in the Methods section. Expression of 120 genes in liver cells was obtained with microarrays and concentrations of 21 hepatic fatty acids were measured by gas chromatography. Hence, the data matrices are of size (40 × 120) for the gene expression and (40 × 120) for the fatty acids measurements. 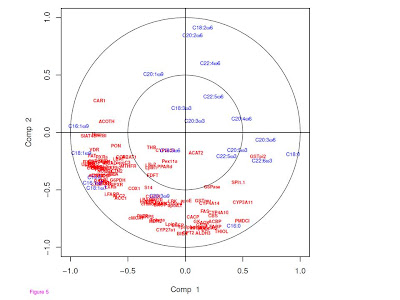 The Authors write: The Correlation Circle plot (above) displays all fatty acids and the genes selected on each component (100 in total in this plot). Highlighted are subsets of variables important in defining each component. For example, C18:2ω6, C20:2ω6 and C16:0 are fatty acids for which variation allows the definition of the sPLS component 2 (top and bottom of the y-axis). Similarly, genes such as Car1, Acoth, Siat4c, Scarb1 (SR.BI) and Slc10a1 (Ntcp, or Ntop [sic]) are positively correlated to each other, and to the fatty acid C16:1ω9 and their variation participate in defining the sPLS component 1 (left-hand side of the x-axis).

I find such analysis and depiction of results useful and look forward to trying this with our GWAS data.

This week I will attend the annual conference of the American Society of Human Genetics, ASHG. It was suggested that we who will broadcast observations, comments, invites, critiques and musings on Twitter should also post an agenda of those sessions we feel are important to attend. I've done just that, listing below those sessions I plan to attend.

All talks are tweetable, opt-out, meaning if the speaker says nothing to the contrary, one can tweet

Posted by Larry_Parnell at 12:20 PM No comments:
Email ThisBlogThis!Share to TwitterShare to FacebookShare to Pinterest
Labels: conference, disease, genetics


The following are what I took away as highlights from NuGO Week 2012, held from 28 to 31 August 2012 in Helsinki, Finland. I felt that this conference showed a marked maturity in research accomplishments of the nutrigenomics community. In the past, this conference and others, as well as personal communications, were quite often invoked intent to use omics platforms without showing much in the way of data. That changed dramatically at this conference – there were presentations with a lot of data.

My take-away lessons from Marju Orho-Melander’s talk (Lund University): Your genetic susceptibility is affected by what you eat/how you eat/what and how much you exercise/etc. She uses the Malmö Diet and Cancer Study n=28499. 1750 have incident T2DM. Protein from animal sources increases risk of T2DM, while whole grain/high-fiber intake decreases the risk. Using the epidemiology data (eg, animal protein intake increases risk) to focus or inform the interaction work may be something worth looking into. She’s ready to perform a GxE analysis using the GWAS data from the Malmö Diet and Cancer Study. Instead of using a genetic risk score for the disease, use a pathway approach to consider a marker for the disease, prior to the endpoint of disease itself. So, look at interactions for glucose and glucose homeostasis in place of interactions for T2DM.

Aldons “Jake” Lusis of UCLA. It is difficult to go from a GWAS hit to a mechanism in humans. He uses a systems genetics approach: integrate clinical traits and intermediate phenotypes across a population using correlation and gene mapping. He uses mice because this offers a controlled environment, tissue access, and deep biochemical profiling. They use 100 classical inbred mouse strains, genome sequenced and GWAS-like association mapping. His group is looking at genetics of dietary response in 6 to 8 mice/strain. Some mice have no change in body fat going from chow to high-fat/high-sugar diet, others have substantial change. They also looked at food consumption. They always look at males and females separately. Food intake may be more strongly related to lean body mass according to the stronger correlation between food intake and body weight over food intake with fat mass. They use a T-test on 135,000 SNPs in a GWAS. Threshold is determined by permutation or simulation. Interactions will be identified using association and correlation in his systems genetics strategy. Visit http://systems.genetics.ucla.edu to see the loci that control body fat or look gene by gene to see what traits are associated with that gene.

Melissa Morine of University of Trento. Within a network, one can perform a modularity calculation – whereby members are highly connected to each other and rather unconnected to nodes outside the module.

Marjukka Kolehmainen of University of Eastern Finland. Of 82 individuals who were obese, only 34 donated abdominal subcutaneous tissue both before and after very low-calorie diet. All 3 PPAR pathways were down-regulated in the subcutaneous adipose during the very low calorie diet intervention. Energy metabolism was also strongly down-regulated. Both pathways returned to near normal levels during the maintenance period.

ETHERPATHS. Anne-Marja Aura of VTT Technical Research Centre of Finland: There is a set of known and detectable metabolites of given fatty acids that can be used as biomarkers of intake. It seems important to assess both microbial metabolites and those found in the serum. Robert Caesar (University of Gothenburg) examines diet-microbial regulation of liver and adipose transcriptomics. Macrophages from germ-free (obese-resistant) mice have decreased expression of Ccr2 chemokine receptor. Compare WAT and liver gene expression in response to metabolites from the gut microflora. Liver should be more responsive because of close link via vena cava. Liver pathways altered: Up: lymphocyte mediated immunity, adaptive immune response, innate immune response, immune effector process, cell activation, chemotaxis, positive regulation in response to stimulus; Down: sterol metabolic process, cell adhesion, lipid metabolic process, etc. Gut microbiota increases liver inflammation during high-fat diet independent of dietary lipid quality. Tuulia Hyötyläinen (VTT Technical Research Centre of Finland) looks at lipoprotein lipids and polar lipids in the lipoprotein fractions. Some of this work is published in Mol Biosyst in 2012. N-3 intervention caused TG levels to go down in females, no change in males. There were also sex differences for metabolites seen in lipoprotein fractions.

Mark Boekschoten of Wageningen University. PLS-path model gives them 44 liver and 69 adipose genes important in body weight gain. Variation in these genes in humans could manifest as GxEs for total caloric intake or saturated fat intake on body weight.

Hector Keun of Imperial College of London. He has two objectives: Testing for association within and between data types; incorporating background knowledge to enhance our ability to interpret associations. A multivariate model example is O2-PLS, which can be used to compare two data blocks, reducing it to the simplest list of associations. This was developed by Trygg & Wold. It is also of interest to describe what variation is not common to the two data blocks. For example, there could be variation that is specific to the metabolomic data that does not show in the proteomic data from those same animals. Pathway significance is calculated using the hypergeometric distribution test, when comparing a set of up-regulated genes with genes in a given pathway to see if that pathway is over-represented, by chance, in the set of up-regulated genes. It is also possible to use this analysis approach on the FFQ data. See Kamburov and Cavill for access to their webtools. His adjustment for background incorporates the fact that the number of observations or tests really for genes is much higher than for metabolites, for example.

Willem de Vos of Wageningen University. The Bacterioides/Firmicutes ratio found in the gut microbiome is not helpful with regard to diet, interventions and obesity. This group uses the log [CFU/g feces] on x-axis on a graph to look at correlation with some factor (he used LPS binding proteins) with changes to the microbiota.

Jacqueline Monteiro of University of São Paulo. There is a correlation or relationship between calcium in the diet and adipocyte differentiation. Kids in the lowest quintile for milk intake were in the highest quintile for BMI in their Delta Project.