A recently published map entitled "The Contiguous United States Visualized by distance to the nearest McDonald's" correlates somewhat but overall not so well with the 2008 map published by the CDC of obesity trends across the United States.

For example, the New England states show close proximity to the restaurants but some of the lowest percentages of obese individuals among the population. In South Carolina, over 30% of the population is considered obese (BMI > 30 kg/m^2) and greater than its neighboring states, but the proximity to McDonald's seems no different than in Georgia, North Carolina and other states in the region. Alabama and Mississippi have some of the highest obesity trends in the USA, but lower prximity to McDonald's. Of note, there is a high concentration of McDonald's franchises in the Chicagoland area because this is the location of the company's headquarters and test kitchen. Lastly, there are high concentrations of the restaurants in the main population centers of Utah (Salt Lake City) and Colorado (Denver), but both these states show rather low population trends of obesity. 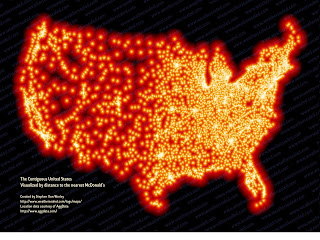 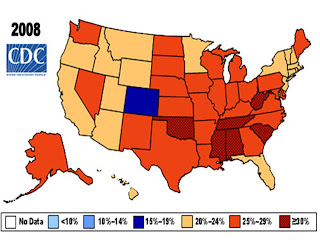 Where there is one, you will find many more. In many instances the presence of one type of establishment acts as a seed for others. Thus, the above in essence uses the location of and priximity to McDonald's as a proxy for other fast food restaurants. The National Health and Nutrition Examination Survey (NHANES), with data from 2007 - 2008, can give some information on meals eaten in the home, meals eaten with the family and money spent on meals outside the home. Those data can be found here. I have not analyzed these data nor have seen a published analysis. I'll have to take a look.
Posted by Larry_Parnell at 4:25 AM 2 comments:
Email ThisBlogThis!Share to TwitterShare to FacebookShare to Pinterest
Labels: fast food, obesity

Genome compexity and the number of genes

This month marks the 10th anniversary of (one of) the announcement(s) of the completion of the human genome. Several have taken this occasion to comment on the successes of genome-based biomedical research, or lack thereof.

At "The Loom," Carl Zimmer has a neat graphic depicting estimates of the number of genes present in the human genome. This number has, more or less, steadily fallen as progress in sequencing and then in filling in remaining gaps in the reference genome sequence has moved forward. My comments to that blog entry are:

The reduction in the estimates of the number of protein-coding genes in the human genome parallels our increased understanding of the complexities involved in regulation of gene activity. For example, many types of non-coding RNAs have been described as well as their roles in modulating the information flow from DNA to protein.

At the same time, I believe that the human genome’s reduced “tool kit” (in terms of number of protein-coding genes) shows a certain level of our genome’s sophistication. Think of the many different ways one can use a screwdriver – say to open a can of paint, or its handle as a hammer. In other words, different proteins can join to different networks in a tissue- or developmental-specific manner. In conjunction with this are the alternatively spliced mRNAs, which often lead to different protein isoforms (proteins that are mostly the same, but with perhaps one different functional subdomain). Think of a Phillips vs. regular screwdriver.

Thus, fewer genes has not meant there are fewer protein isoforms nor less complex protein-protein or protein-small molecule interaction networks. To the contrary, there is an increased complexity and that is one reason it has been difficult to define all the players in a particular human affliction such as type 2 diabetes or cancer.

Here, I would like to add a couple of other points:

1. Genetic variation, whether common, moderately rare or even unique to an individual or family, no doubt has a role in adding to the complexity of interactions among the (relatively) small number of genes and small molecules. For example, our research is considering transcription factor binding sites and seed sites for mRNA-mRNA interactions that are created by minor alleles of SNPs.

2. Where much of the above leads is toward differential pathway dynamics. Because the number of protein-coding genes is low while the human organism, its response to a number of different situations (consider how long tobacco smoking or a poor diet must be endured, on average, before life-threatening phenotypes emerge), and its great capacity to develop, survive and even thrive with numerous genetic aberrations are all complex, many of the answers we research seek simply remain to be discovered. We just do not know all the players - proteins, RNAs, genome state (e.g., methylation) and small molecules - and so cannot fully describe a type 2 diabetes pathway in a series of affected tissues, or a given cancer for that matter. Progress is being made - sequencing of the genomes of a tumor and healthy tissue from the same individual have uncovered common pathways and perhaps drug targets. There, however, remains much more to describe before the full potential of human genomics research will be realized.
Posted by Larry_Parnell at 7:13 PM 1 comment:
Email ThisBlogThis!Share to TwitterShare to FacebookShare to Pinterest
Labels: diet, disease, genes, human genome, pathway
Newer Posts Older Posts Home
Subscribe to: Posts (Atom)